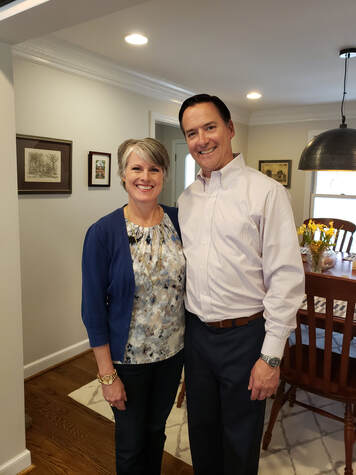 “One of my fondest memories is leaving our wedding in the Wren Chapel and walking through the Sunken Garden to the university center, now known as the Sadler Center, on a beautiful sunny day,” said Tom.

While the Dunkels can easily recall dozens of cherished experiences from their time at William & Mary, it was the relationships they built on campus that have had the greatest impact in their lives and inspired them to pay it forward by establishing a scholarship and also including the university in their estate plans.

“I was a Spanish major and always felt a wonderful sense of encouragement from my professors. I appreciated that support,” said Erin, who is vice president of marketing and communications for the Pennsylvania Horticultural Society in Philadelphia. Tom remembers the intensity of the MBA program and the strong bonds formed with his peers, especially Jennifer Quartana Guethoff ’88, M.B.A. ’95.

“The first year was challenging. I learned how to work hard and I gained a great foundation for the future,” said Tom, who is the co-founder of Belrose Asset Management, an alternative investment management company based in Wayne, Pennsylvania. “Jennifer and I would often butt heads, but out of that came a mutual respect and a deep, meaningful friendship.”

Last year, when Tom learned that Jennifer was diagnosed with amyotrophic lateral sclerosis (ALS), he wanted to honor her.

“She is friendly and outgoing and knew everybody,” said Tom of Guethoff. “Throughout her career, she’s demonstrated what it means to lead a life of principled achievement. She has shared so much of her time and talents with the William & Mary community.”

The former global deputy chief ethics officer at Deloitte, Guethoff remained engaged at W&M after graduation, including presenting an Alumni Webinar on building an ethical culture and joining the Society of 1918 Leadership Committee.

With Tom’s upcoming 25th reunion, the Dunkels had already been talking about making a significant gift to William & Mary. They decided to help establish the Jennifer Quartana Guethoff MBA Class of 1995 Scholarship Endowment. The Dunkels provided a base donation, and since then many MBA classmates have collectively donated $165,000 toward the $200,000 goal for the scholarship — an indication of Jennifer’s positive impact on her MBA peers.

Both Tom and Erin have also made plans to grow the endowment in the future by including the William & Mary Business School Foundation in their wills. The Dunkels see the benefit of giving as both practical and honorable. As budgets are squeezed, they believe private philanthropy is the only way to maintain William & Mary’s 327-year-old reputation for providing an exceptional education.

“Every dollar we invest in William & Mary not only keeps the engine going, it creates a legacy that allows others to benefit,” said Tom. “We want to think outside ourselves and do something greater. Including a gift in our estate plans allows us to pay it forward, in perpetuity, so we can help the university a long time from now.”

“For me, it is important to support the institution that supported us,” notes Erin. “If you are going to give your hard-earned money anywhere, you want to be sure to support a compelling and relevant cause. Without a considerable endowment, the university can’t remain competitive unless alumni and friends give back. William & Mary has done a great job communicating how the money is being used in a thoughtful and strategic way. We are happy to honor Jennifer and be able to help MBA students for years to come.”